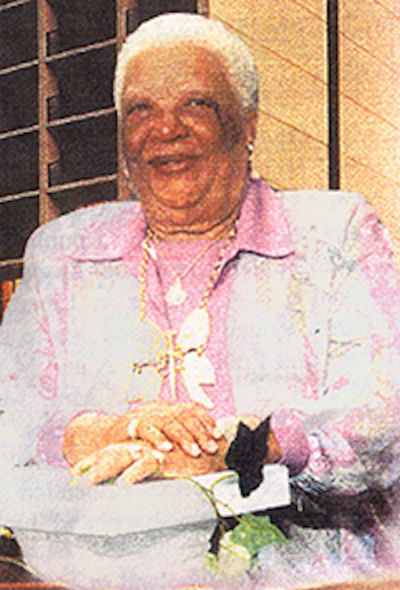 “All that I am, I will do for the Lord and the glory of God.”

Elise LeNoir Morris was born in DeRidder, Louisiana on October 25, 1916, and moved to New Orleans, Louisiana at an early age. There she attended public and parochial schools graduating from Xavier Prep in 1933 and Xavier University with a B.A. degree in Liberal Arts in 1937. That year, she met John Morris, a transfer student from Dillard University studying medicine. When she asked his major field of study John answered “economics.” Elise, whose major field of study had been “Liberal Arts,” changed her field of study to economics. The two became friends, took long walks together, attended parties, fell in love and eventually married. Elise pursued further education at Southern University in Baton Rouge, where she studied Library Science. She was given a scholarship to Grambling University Teachers Training Institute to become certified to teach.

She received her credentials in 1938. Elise earned a Master of Education degree from Prairie View A&M College(university) of Texas in 1965 having majored in Special Education. Other graduate study took place at the University Of Houston, Texas Southern University and Sam Houston University. She also pursued special religious studies at University of St. Thomas.

Early in her career, Elise was employed as a teacher at Louisiana and Texas public and parochial schools in the Diocese of Galveston and Houston. Elise also taught at Our Mother of Mercy Catholic School at elementary and high school levels and was Director of Pre-school and Kindergarten at Our Lady Star of the Sea Parish. Later, Elise was elected a member of the faculty of Galena Park Independent School District where she retired from the teaching profession in Galena Park I.S.D. There, she served in various teaching positions including high school English, French and Social Studies for the accelerated students. She also taught Special Education and served as Resource Department Head at Galena Park Middle School.